HMS, BNP Inspects Rural Road Projects in Edo, Imo, Enugu States, Says Construction Of 377 Rural Roads Meant To Stop Post-Harvest Losses
Inspection Tour in Edo State Minister of State for Budget and National Planning, Prince Clem Ikanade Agba, on Tuesday (February 2, 2021), said that the Federal Government’s construction of 377 rural roads across the country was to stop annual post-harvest losses. The minister stated this when he paid a courtesy visit to Agadagba of Olodiama, Godwin Ogunyibo, after the inspection of the ongoing 9km Igo – Ikpalla rural road project in Ovia North Local Government Area of Edo. Agba, who announced that President Muhammadu Buhari had released N34 billion for the project, said 266 communities in the six geo- political zones of the country would benefit from the Federal Government’s intervention. He said that the President’s decision to embark on the rural roads project was borne out of his concern for farmers mostly in rural areas who, due to bad roads suffered post-harvest losses. The Minister said that the President particularly instructed that the rural roads must be in agro corridors. “As part of the Economy Sustainability Plan (ESP) of the President, especially as part of effort to mitigate the post Covid-19 pandemic, his attention is particularly on agriculture. The President, who wants us to eat what we produce, says we must produce what we eat. “He is particularly concerned that food produce in the rural areas find it difficult to get to the cities because of poor roads. The farmers suffer a lot of post-harvest losses in the absence of storage facilities. “You go to the river to catch fish, before you get to the market the fish turns bad; over 50 percent of our mango harvested yearly is wasted. The only way we can encourage investors to these rural areas and also encourage farmers is to build these roads,’’ the minister said. Agba noted that aside the N34 billion for the rural roads, N60billion had also been released for the maintenance of 257 federal roads across the six geo-political zones. “This maintenance work is being supervised by the Federal Road Maintenance Agency (FERMA),” he stated. The minister urged people in the communities where these road projects are sited to co-operate with the contractors in order to ensure quality work. In his remark, the traditional head of Olodiama, Ogunyibo, commended President Buhari for the project, adding that the project would enhance the livelihood of the people. “We are fishermen and our fish does not get to the market because there is no road; we also do not have means of preserving these fish. This road project has shown that the President does not believe in propaganda,” he said. The minister’s inspection tour, which is part the monitoring and evaluation mandate of the ministry, is being extended to the 377 rural roads, which  are being constructed under the supervision of the Federal Ministry of Agriculture and Rural Development In a related development, the people of Iviebua, Iviakhua and five other communities in Etsako East Local Government Area of Edo have benefitted from a13.5-km rural road in the area which, according to the minister, would bring down the cost of transportation by 30 percent. Speaking on behalf of the benefiting communities, Chief Kennedy Izuagbe lauded President Muhammadu Buhari for the project, saying “Some of us never thought these roads will be constructed in our life and times.” The other communities to be opened up and connected through the road project initiated by President Buhari to forestall post-harvest losses are Iviegbepui, Ivianokpodi, Ivioghe, Ebele and Okpekpe. Izuagbe, who said that the communities had long been abandoned in terms of development projects, noted that the road would also spur both social and economic development in the area. According to him, “To say that the people are happy will be under statement, we are indeed elated by this development. Over the years, the people had suffered untold hardship in the process of transporting goods and services from these communities to the city. These inconveniences have often resulted in high cost of transportation to and from these communities. The minister, who undertook an on-the-spot inspection of the project on Thursday, February 4, 2021, told the people that for easy evacuation of farm produce, the seven communities would be linked with Ebele and Okpekpe to reduce travel time. He said the essence of the roads was to reduce post-harvest losses, which he said were about 60 percent. According to him: “To ease evacuation of farm produce, the President approved N34b for 377 rural roads in 266 communities across the country.” The Project Manager, Mr Bolaji Bakare, said the network of roads would have side drains of 5, 500 meters.
Bakare, who said that the road construction had attained 50 percent completion rate, would be 100 percent completed by March. 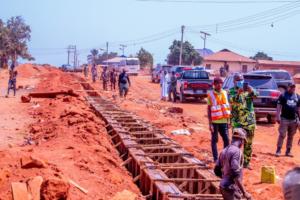 The minister, also, on Wednesday, March 3, 2021, inspected the ongoing dualisation of 120km Benin-Ehor-Auchi-Okene road project, which was estimated to cost about N120 billion with bridges and flyovers to ensure Safety and ease of transportation.
The project is one of the 44 road sections being developed by the Federal Government with the SUKUK funding. While assessing the progress of work at the Ehor-Auchi and Auchi-Okene axis, he reaffirmed government’s commitment to keep working towards the completion of the project in spite of existing challenges.
Inspection Tour in Imo State
On Thursday, February 18, 2021, the minister paid a working visit to Imo State where he inaugurated the 3.5km asphalted Umucheke Okigwe rural road in Onuimo Local Government Area.
Present on the occasion were Princess Miriam Odinaka Onuoha, member of the House of Representatives, representing Okigwe North; Imo State Commissioner of Agriculture and Natural Resources, Dr Lambert Orisakwe; former National Organising Secretary of the All Progressives Congress, Emma Ibediro; Regional Director of FMARD, Mr Felix Kehis, and State Director of FMARD, Mr Chris Iwuchukwu, among others. The minister reassured members of the community of government’s commitment to improve food security by developing road infrastructure along agro corridors and providing loan facilities to more farmers.   Inspection Tour in Enugu On Friday, February 19, 2021, the minister paid a working visit to Enugu State to inspect the ongoing construction of the 7.5km Aku-Lejja-Nsukka rural road project in Igbo-Etiti Local Government Area. He said that the Federal Government had also released another N60 billion to the Federal Roads Management Agency (FERMA) for the rehabilitation of failed portions of major highways across the country. According to him, the country witnessed a shortfall in staple food supply during the pandemic which invariably was responsible for increases in food prices. He said it was unacceptable that farmers in the rural areas were recording 50 to 60 per cent post-harvest losses due to the bad nature of their roads. “The President is very concerned about the livelihood of people in the rural areas and he is concerned that 60 per cent of what you produce get spoilt. That was why during the pandemic, food became a problem and he now decided to encourage our farmers by embarking on these projects to link your communities to urban centers. “Our target is to record 100 per cent post-harvest success without necessarily increasing acreages, and to achieve this, we must improve infrastructure within the agricultural corridor,” he stated. Agba said the essence of this visit was to assess the extent of work so as to make plans for the release of more money for the project. Earlier, the traditional ruler of Lejja Community, Igwe Anthony Ochike, described the intervention by the Federal Government as “a big relief”. Ochike said earlier appeals by the community for the construction of the road failed. The traditional ruler commended the Federal Government for the award of the contract and appealed that the remaining 4kms that would take the road to Nsukka be awarded too. Also, Mr Attanacius Eze, who spoke on behalf of the community, said President Muhammadu Buhari had by the award of the contract given the community cause to repose greater faith in his administration. He said that the ancient Lejja community, which came into existence in about 200BC, was seeing an asphalted road for the first time. “It is the first time our peace-loving people are walking, riding and driving on a tarred road in our community,” Eze said.    Sufuyan Ojeifo SA Media to HMS, Budget and National Planning
Admin2021-05-24T14:00:23+01:00 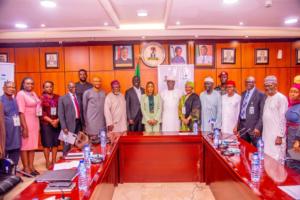