The Honourable Minister of State, Budget and National Planning, Prince Clem Ikanade Agba, hascalled on every Nigerian to actively join the process of rebuilding trust and building back a better Nigeria Police Force that works for the country.

Agba made this call while delivering his welcome address on the third day of the Open Government Partnership week which focused on citizens-police dialogue.

Taking the#EndSARS protest as focal point, the Minister acknowledged the swift response of the Government to the demands of the protesters by immediatelydisbanding the unit, committing to reforming the police and rebuilding trust between the police and the citizens they served. 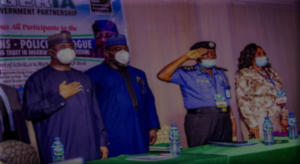 He explained that it was important to go beyond meeting the demands of the protesters, to rebuilding trust in a sustainable manner; and that in order to achieve result, the Government collaborated with its civil society partners and revised the second National Action Plan to include some activities like:

Agba added that the aim of changing the law setting up the Police Service Commission was to improve on their powers, operations, and ability to carry out oversight supervision of the police.

“Stakeholders recognised the breakdown of trust between the police and citizens which is worsened by the lack of opportunity to dialogue and interact with each other. They agreed that a town hall style interactive session between the citizens and the police will provide an opportunity for the process of rebuilding mutual healing and respect”…

He added that the dialogue series was going to be held in the 6 geo-political zones and further appealed for cordiality and respectfulness even in disagreement, as the dialogue aimed at rebuilding trust, repairing damaged relationships between the police and citizens, not trading blames, as well as making suggestions and recommendations on how to build a better police force.

In his opening remarks, the Minister for youth and sports development, Mr Sunday Dare, pointed out that Citizens’ participation in Government was at the centre of Open Government and one of the important rudiments of the 2nd OGP National Action Plan.

According to the sports Minister, one of the ways of protecting the civic space was Dialogue, of which the dialogue between the Citizens and the police was clearly provided for in Activity 7, Commitment 13 of the OGP 2nd National Action Plan and approved by President Muhammadu Buhari.

He further expressed belief that the dialogue would serve as a powerful tool in improving the relationship between Citizens and the Police.